To share your memory on the wall of Harold Siener, sign in using one of the following options:

Harry Siener was an interesting human being, to say the least. Growing up in New Orleans, he was known as ‘Harry the Horse’, for his feats of physical speed and strength at City Park in the 1940’s, and was quite the Cassanova from his teenage years through his late eighties. He joined the Navy, fought in a war, lost a knee, won a medal, and lived to tell about it. Harry could best be described as a sweet southern gentleman with razor sharp wit and disarming charm, but could also be stubborn and, on occasion; “grumpy pants”.
Harry held a lifelong love-hate relationship with his -beloved- New Orleans Saints. He enjoyed, among other things, collecting coins, complaining about the government, crafting art from household objects (long story), and “little fellas.”

Harry led a long, full, interesting and adventurous life, with his final chapter spent surrounded by his offspring --- We should all be so lucky. Sleep well, sweet prince, your pain is gone.

He is survived by his two children, H. John Siener III and Alicia Walters, both of Janesville; 4 grandchildren, Dylan Siener; Lexi, Sam and Ali Walters; 2 siblings, Nick (Arlene) Siener of Mandeville, LA, and Maude Siener of Metairie, LA; as well as nieces, nephews, other relatives and friends. He was preceded in death by his parents and sister, Evelyn Liang.

Out of the night that covers me,
Black as the pit from pole to pole,
I thank whatever gods may be
For my unconquerable soul.
In the fell clutch of circumstance
I have not winced nor cried aloud.
Under the bludgeonings of chance
My head is bloody, but unbowed.
Beyond this place of wrath and tears
Looms but the Horror of the shade,
And yet the menace of the years
Finds, and shall find, me unafraid.
It matters not how strait the gate,
How charged with punishments the scroll.
I am the master of my fate:
I am the captain of my soul.

No services are being planned at this time. Interment will be in Lake Lawn Park, Metairie, LA at a later date. To honor his love for children, memorials in Harold’s name may be made to your local Boys & Girls Club. The family is being assisted by the WHITCOMB-LYNCH FUNERAL HOME & CREMATION SERVICE, 21 S. Austin Rd. Janesville. For on-line condolences: www.whitcomb-lynch.com
Read Less

To send flowers to the family or plant a tree in memory of Harold John Siener Jr., please visit our Heartfelt Sympathies Store.

Print
No services are being planned at this time

We encourage you to share your most beloved memories of Harold here, so that the family and other loved ones can always see it. You can upload cherished photographs, or share your favorite stories, and can even comment on those shared by others.

Posted Sep 05, 2020 at 05:02pm
Harry and I worked together at the Louisiana Department of Labor. I must say, his obituary is on spot. There was much I enjoyed about Harry and I will forever regret not telling him that very thing. We talked about world affairs, government excess and coins. I am proud to say that I had the privilege of entertaining him as my dinner guest in my home. All that met Harry in our agency respected him for who he was in the workplace. He was never pretentious nor arrogant. Even though he never shared his accomplishments in this life, we knew he was a man of character, even on days when he was Mr. Grumpy Pants. Rest easy Harry, you did more than most. And you did it with class. My sincerest condolences to Harry's family. The world is a little less without Harry.
Comment Share
Share via: 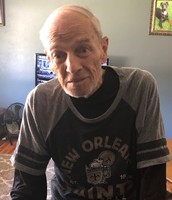