To share your memory on the wall of Donald Augustine, sign in using one of the following options:

Don is survived by his daughter, Maggie (Heath) Chapman of Edgerton; step-son, Mike (Joan) Moe of Janesville; 4 grandchildren: Addison (Jamie) and Austin (Allison) Chapman, Jennifer (Ryan) Steinke and Jeremy (Kristi) Moe; 5 great grandchildren: Hazel and Dawson Chapman, Tyler and Matthew Steinke and Katelyn Moe; and many other relatives and friends. He was preceded in death by his parents; wives, Mary Ann and Ruthie; and 2 brothers; Jerome and Eugene Augustine.

Services will be held at 11:00 a.m. on Friday, Aug. 21, 2020 at the Chapel of Oak Hill Cemetery. Burial will follow with full military honors. WHITCOMB-LYNCH FUNERAL HOME & CREMATION SERVICES, 21 S. Austin Rd. Janesville is assisting the family. For on-line registry and condolences: www.whitcomb-lynch.com

Special thanks to nurses Kevin Peters for going above and beyond for my father and our family, and to Cheryl LaBarge for taking such great care of her “prince charming”. Also, thanks to Betsy, Jan and all of the Cedar Crest employees for their wonderful care for our father.
Read Less

To send flowers to the family or plant a tree in memory of Donald Augustine, please visit our Heartfelt Sympathies Store.

We encourage you to share your most beloved memories of Donald here, so that the family and other loved ones can always see it. You can upload cherished photographs, or share your favorite stories, and can even comment on those shared by others.

Posted May 19, 2020 at 08:49pm
I am glad that I had the pleasure of getting to know Don while I have been working at Cedar Crest. He made many of my days so much better for having met him. He was such a sweet guy and he made me smile and laugh a lot. He will be greatly missed.
Comment Share
Share via:
SP

Posted May 19, 2020 at 12:12am
I had the pleasure of meeting Don through our weekly Tuesday night Hymn Sings at Cedar Crest. He had the best (and corniest at times) jokes ever! He will forever be missed! I send my condolences to his entire family.
Comment Share
Share via:
HS

Posted May 16, 2020 at 03:10pm
Don will be greatly missed by all as you will to Maggie will probably not see you as much as we used to Mike and I send our love and prayer

Medium Dish Garden was purchased for the family of Donald Augustine. Send Flowers

Posted May 15, 2020 at 11:41pm
My dear Uncle Donald. So many memories. Although not biologically related, he treated me like his own family. Some of my best memories were driving to Milwaukee to see him, walking up 7 stories I swear in blistering heat and going to the State Fair. And then when we got back, he would break out the projector and we would watch all the old funny movies from the 40's, WC Fields and Laurel and Hardy and the Marx Brothers. He would laugh always. And point. He always pointed. His joy was infectious. He adored his daughter, Mags. He was kind, respectful and never had a cross word for anyone. And the best hair. He had the absolute best hair! RIP Uncle Donald. Give Genie my love.
Comment Share
Share via:
HS

Posted May 15, 2020 at 10:43pm
Sent with love and remembrance of your dad. Much love & prayers for peace & comfort during this difficult time. Love, The Castillo Family

Flowers were purchased for the family of Donald Augustine. Send Flowers 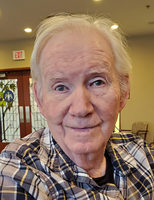