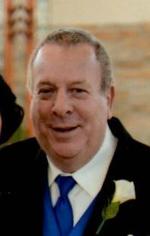 Michael J. “Marty” Martin, age 69, a longtime resident of Janesville, passed away very unexpectedly Friday afternoon, April 5, 2019 at the Mercyhealth Hospital & Trauma Center Emergency Department. He was born July 26, 1949 in West Allis, WI, the son of the late Ivan & Dorothy M. (Bennett) Martin. He was a graduate of Prospect High School in Mt. Prospect, IL, Class of 1967. He then attended Illinois State University.
On April 5, 1986 he married the former Lou Ann Butters at St. William’s Catholic Church in Janesville.
He moved to Janesville when his parents purchased the Coast to Coast Hardware Store in Creston Park, and he worked with them until their closing. He was the Store Manager for Ace Hardware at the S. River St. location for over 25 years. Marty always loved remodeling and building projects, and as a result he opened C & J Home Improvement Co. He also had worked as a Maintenance Technician for Dean Health/SSM Health. At the time of his passing, he was working as a Concierge at SSM Health/St. Mary’s Hospital and Clinic.
Marty was a very avid softball player in the various leagues in Janesville.
He will be missed by his grandchildren as he was the greatest Grandpa ever! His life revolved around his family! He made the time to attend all his children’s and grandkids’ sporting and school events. He enjoyed coaching them when the opportunity arose. He will be remembered as one of the most laid back and easygoing people ever. He also loved to help others, finding the time to lend a hand whenever someone needed assistance. He was “always starting his last project” until HGTV gave him another idea! Marty did anything he would take on with great pride, and he always did his best at whatever the task was.
He is survived by his loving wife, Lou Ann; his 4 children and 8 grandchildren, Brian (Erin) Martin, and their children, Jakob and Elin, Tim (Kelli) Martin, and their children, Maycee and Lucas, Dave (Megan) Martin, and their children, Sophie and Sawyer, and Erika (Kurt) Spahn, and their children, Brooke and Kensey; his brother, Don (Nancy) Martin, of Newburgh, IN; his sister-in-law, Annie Martin, of Oak Ridge, TN; his mother-in-law, Charlotte Butters, of Janesville; his brothers-in-law and sisters-in-law, Lynn (Kurt) Kersten, Bill (Lisa) Butters, Tim (Linda) Butters, Paul (Sandy) Butters, and Pat (Angie) Butters; and by many nieces, nephews, and good friends. Besides his parents, he was preceded in death by his brother, Richard Martin, and his father-in-law, William T. Butters.
Funeral services with a Mass of Christian Burial will held at 11:00 A.M. on Wednesday, April 10, 2019 at ST. WILLIAM’S CATHOLIC CHURCH, 456 N. Arch St., with Fr. Jim Leeser officiating. Visitation will be from 4:00 until 7:00 P.M. on Tuesday at ST. WILLIAM’S CATHOLIC CHURCH, and from 10:00 until 11:00 A.M. on Wednesday at the CHURCH.

All rights reserved. This obituary is also archived at obittree.com